Experts Round Table in Aigialeia: The importance of branding in place promotion

You are here:
In the framework of the European project “F.A.M.E. ROAD” in which the Municipality of Aigialeia participates as a partner, an Experts Round Table was held on Friday October 8th, 2021, in the former City Hall of Confederation (Rododafni, Aigio).
Representatives of local bodies were present, while there was also the possibility of online participation.
The event was greeted by the Mayor of Αigialeia Mr. Dimitrios Kalogeropoulos, the Deputy Mayor Mr. Vasilis G. Christopoulos and was coordinated on behalf of the Municipality of Aigialeia by Ms. Chrysoula Christia, who also made a brief presentation of the F.A.M.E. ROAD project.
Mr. Giannis Aesopos, President of the Department of Architecture of the University of Patras, saluted the Round Table. Afterwards, Mrs Georgia Zouni, PhD in Tourism Marketing at the University of Piraeus, presented good practices on branding and marketing of the place, while Mr. Vassilis Papaioannou, ceramist and member of the team  “Cerameon Traces”, referred to the contribution of art in the promotion of the place. Finally, Mr. Nikos Drakonakis from ETAM AE, the contractor of F.A.M.E. ROAD project, referred to the branding activities in the area of Aigialeia and was followed by a dialogue of the participants on the proposed logos of the area which were created within the project and are based on its 4 axes. 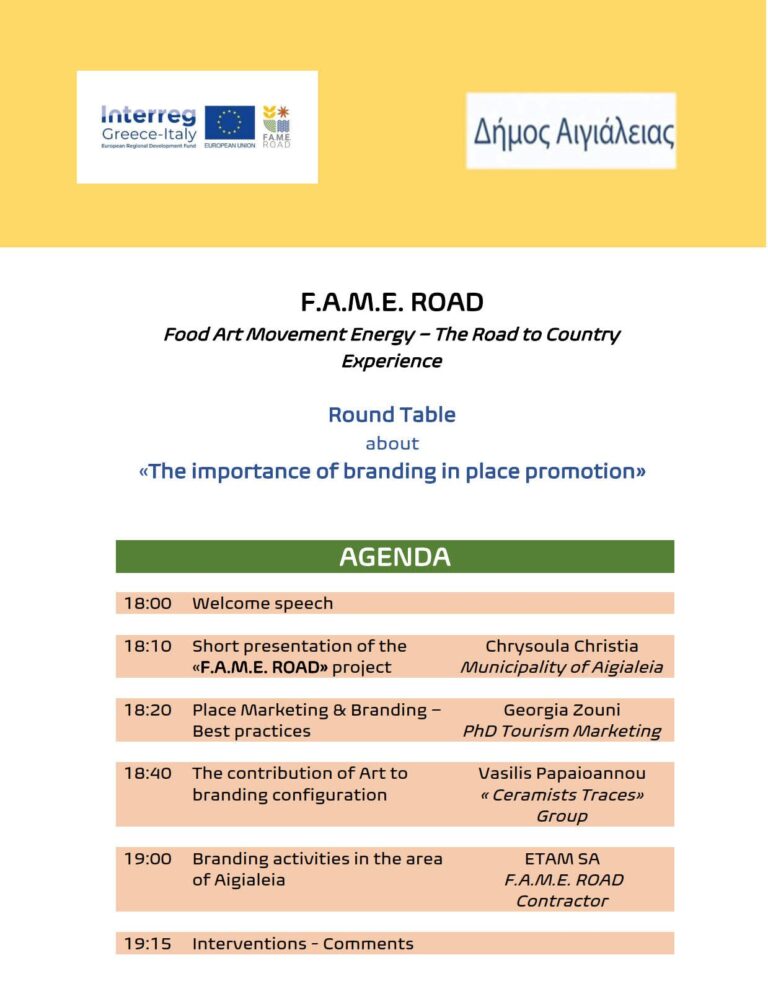